An ancient Lviv city center, Kamyanets-Podilskyi Castle, Khotyn Fortress, Chernivtsi Residence of Metropolitans (now, Chernivtsi National University), Dovbush Rocks, Shatsk Lakes – all these places are well-known to every Ukrainian traveler. Most of the tourists who want to go somewhere usually choose the west of our country. However, little of us have heard about less famous but not less beautiful places which gladden the eye of everyone who managed to see them. We offer you a list of little-known places of Western Ukraine which necessarily have to be visited.

1. The Tunnel of Love (near Klevan village, Rivne Oblast) 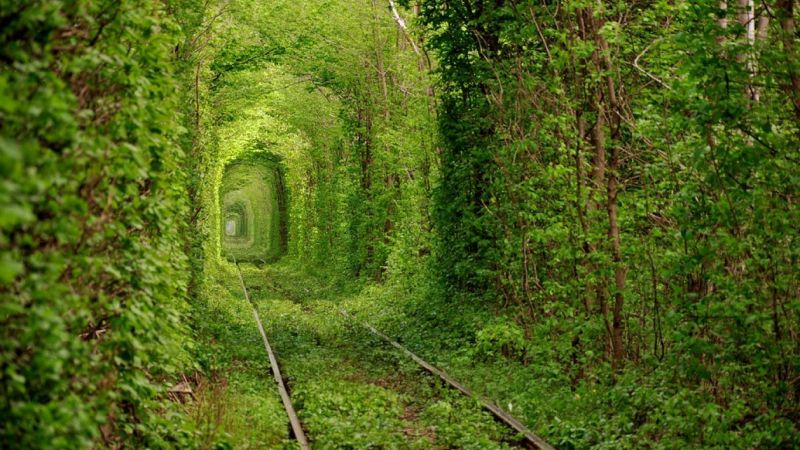 The tunnel has been created from the thickets of trees and bushes that have intertwined together forming an arch shape. By looking at this impressive wonder for the first time, it is hard to believe that it was created by nature itself, not by a professional landscape designer. Starting from May, the leaves of trees and bushes together with flowering plants create a tunnel around the railway route which seems to be covered with a silken carped. One of the legends says that this wonder of nature has evolved after the tragic death of a local couple of lovers. However, it is more likely that the nature created the Tunnel of Love after the railroad had been forsaken and no one cut the branches in time. The trees and bushes widened, and the freight train which used to run there every day had specified the direction of their growth: in this way, the natural arch construction had been created. Nowadays, it is the favorite place of many tourists and newlyweds. 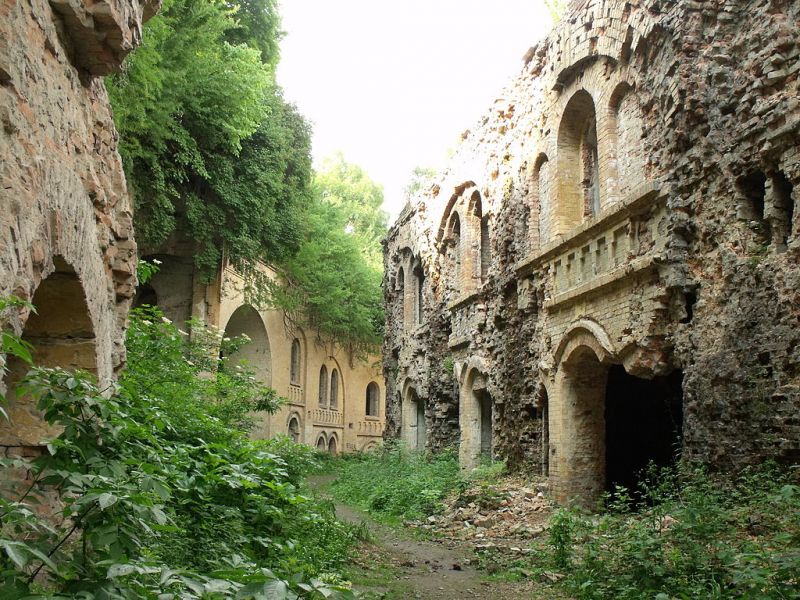 A pearl of fortification art, Tarakaniv Fortress, is located near Dubno city. It was built in the XIX century for reinforcement of the western boarders of Russian Empire and was a completely independent military unit. The fortress covered almost 4 hectares of territory and had 7 underground levels. On its premises one could find bakery, wash-house, church, morgue, call office, 3 wells, and other facilities necessary for garrison’s life. Nowadays, Tarakaniv Fortress meets its visitors with a complex system of underground labyrinths, tunnels, rooms, DOTs, and stairs. One can get there though the entrances in four moats which surround the building. 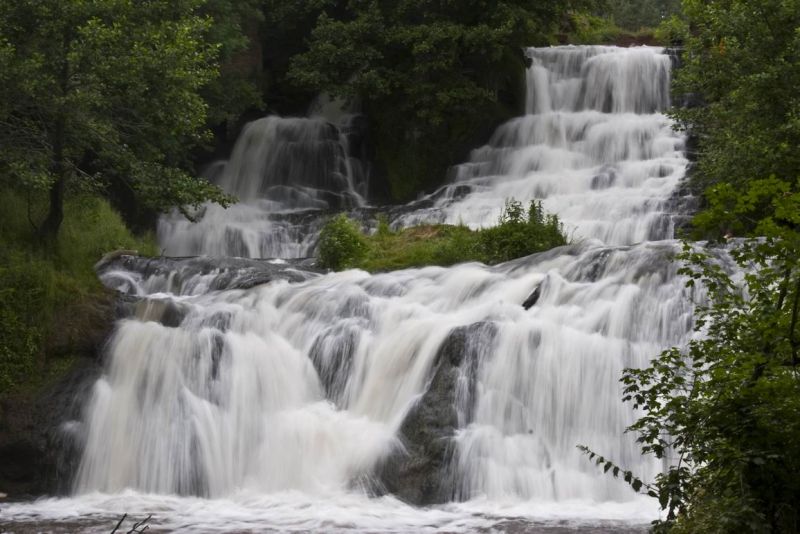 Dzuryn Waterfall is considered one of the highest flatland waterfalls, although, it is not famous to many people other than the residents of Ternopil region. The highest of three cascades makes 16 meters. Dzuryn canyon, in which Chervonohorod Waterfall is situated, makes the top ten most beautiful places in Ukraine. According to the legends told by old people, the waterfall was artificially created by Turkish-Tatar hordes, which in 1620, after the victory of Polish and Cossac armies destroyed everything on their way from Kamyanets- Podilskyi to Lviv and Przemysl. As a matter of fact, the Dzhuryn River was once quite deep. In Chervonohorod, it creates a long loop washing the settlement with its waters. In order to conquer the castle, the towers of which have remained till nowadays, the Turkish had to pass a stony mountain range and direct the water to Dzhuryn Waterfall, cleaning their way to the castle. However, it is only a legend while the waterfall is real.

Zalishchyky is a small resort town which lies on a magnificent flatland on the left bank of the Dniester River in Southwestern Podillya, as if on a semi-island. The Dniester River swirls around this regional center in such an impetuous way that it seems like it is about to suffocate the small town in its deep hugs. However, Zalishchyky is not against the hugs because due to the high banks of the Dniester, the town enjoys its mediterranean climate. The opposite steep bank of the Dniester on the side of Bukovyna encloses Zalishchyky from three sides, namely, from south and east. It ascends 70 – 120 meters above the river. From this side, one can enjoy a breathtaking view of the city and the Dniester meander.

Bakota is a place which cannot be found on a map. It is a so called non-existent paradise. Nowadays, this name is used to call the territories along the Dniester banks near the remains of one of the oldest monasteries of Ukraine. A spirit of an ancient history wanders here above the crystal clear water. Bakota is a village of Kolodiiv council of Kamyanets-Podilskyi region. However, this village cannot be found on a map of Ukraine. Its former residents cannot come back and wander among the empty houses or look at the abandoned gardens. The reason for this is the fact that on the place where Bakota used to be long time ago, nowadays, the Dniester River flows. On October 27, 1981, with regard to the construction of the Dniester hydroelectric power center, the Regional Executive Committee decided to exclude Bakota from the registration data. Nowadays, the place is a part of Podillya Tovtry National Natural Park. 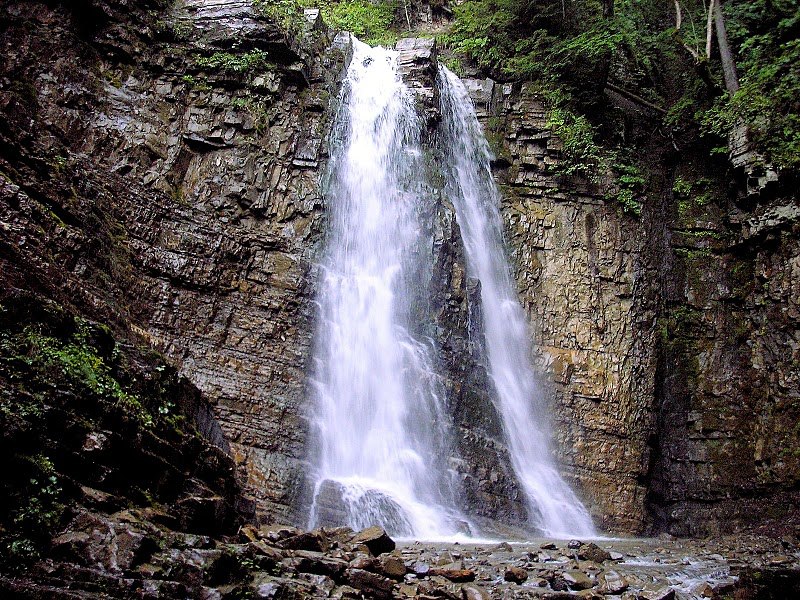 It is one of the highest and the most beautiful Carpathian waterfalls. It is situated in a picturesque canyon between steep mountains. The height of Manyava Waterfall is near 18 meters. There are a couple of two meters high thresholds up and down the stream. In the nearby forest, on the rock above the river, there has preserved an ancient monastery of the XVII century. It was established by a monk of Afon, Job Knyahynytskyi. Once, this monastery was surrounded by a stone wall which saved people at times of Turks and Tatar attacks. In the past, the library of incunabula was located there. Legends say that one of the leaders of Opryshko movement, Oleksa Dovbush, visited that place quite often. A beautiful Carpathian nature, clean mountain rivers and fresh air, interesting green tourism routes, sacred places and piece have wholesome impact on everyone who wants to take a rest from a big city. One can clean their mind and soul during our trip, which also covers other sacred objects of Halychyna. 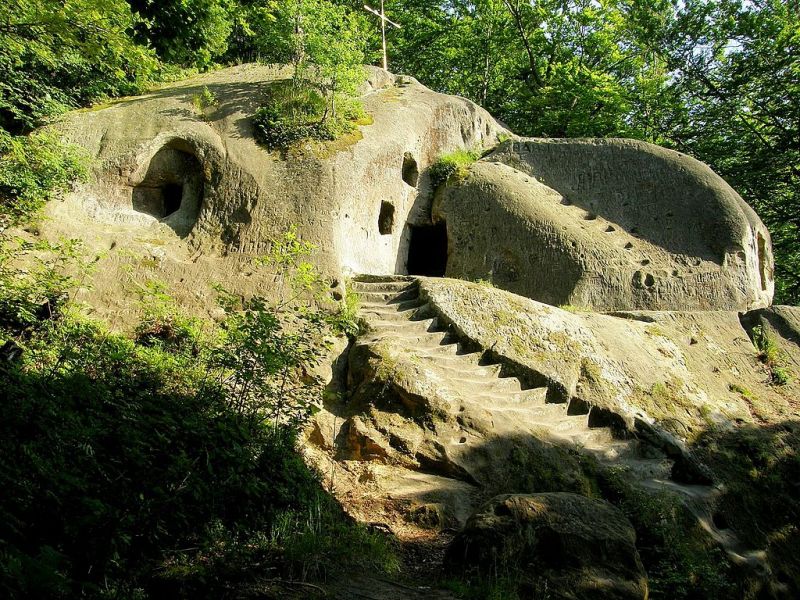 One of the historical-cultural values of Lviv region is the Cave monastery (Pechernyi monastery), which is situated near Rozhirche village. It is a big monastery complex located in the caves and a unique template of sacred rock architecture of the XIII-XVI centuries. Such architecture was not typical of Halychyna area. The monastery itself is located on the hill, which opens a beautiful view on the surrounding territory and the valley of the Opir River. The rocky caves of the monastery are situated in two layers. The lower layer served as dwelling apartments while the upper layer served as a church. In 2003, a small icon was put on the place of the former church. 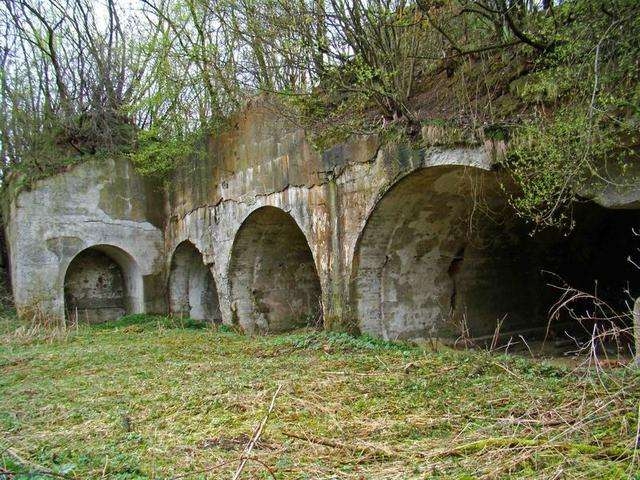 In the XIX century, Przemysl was elected as a strategic checkpoint according to the Austro- Hungarian Empire’s concept of safety. For this reason, a 45 kilometer long defense wall was built on the hills around the city. It was one of the biggest fortresses of the Europe that consisted of 57 forts, 6 of which are now situated on the border territory of Ukraine and are open to tourists. The best preserved fort is Dzevenchytsi. This fort has maintained its multilevel construction, and the pathway near its moat has a lot of turn-offs. The forts which are situated to the south of the border, including Lysichka, Bykiv, and Pleshevychi, are in much worth state. To the north, there is Marushka Lis fort. Unfortunately, only ruins of Lysichka fort have preserved till nowadays. Each of the forts is situated on the hill and is surrounded by a moat. Interestingly, Fort.Missia festival used to be held on this place on the first three days of July. 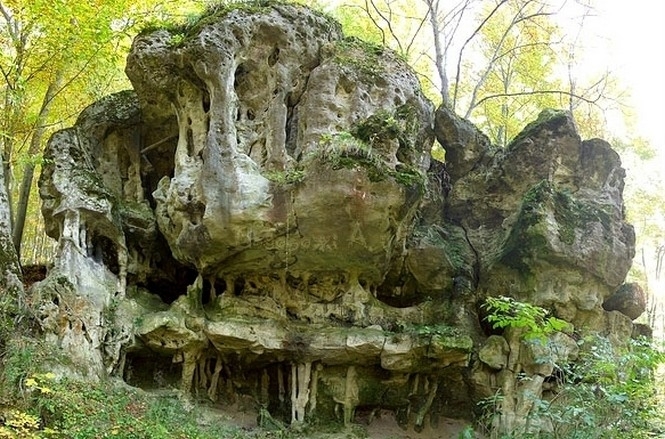 Pryjma grotto is unique in its beauty as well as history, and is situated 2 kilometers from Mykolaiv, Lviv Oblast. According to archeologists, the ruins of the ancient Rus city, in particular, its caves, remain near town Mykolaiv. If you like ancient past and archeological dig you will be interested to visit the “apartments” of the Neanderthals which were found on the territory of the grotto. Although, the real reason for visiting this place is an absolutely fantastic and unreal look of this dwelling grotto.

Categories:
AllInteresting in the World
Social